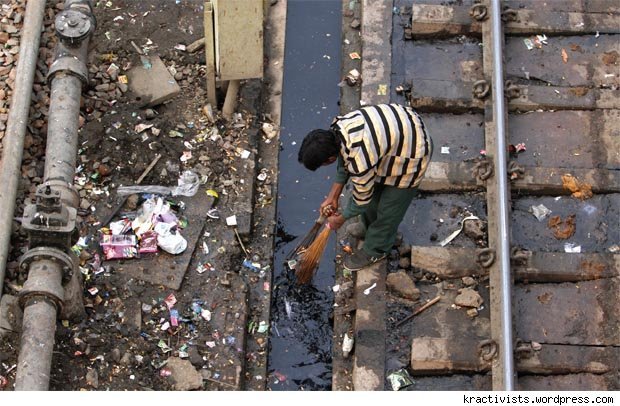 Ministers after Ministers, Budgets after Budgets, Trains after Trains! And Sanitation of those trains and railway stations? IGNORED!

It was recently reported that there is only one toilet at the Vishakhapatnam Railway station. Over 20,000 passengers step down at the Vishakhapatnam railway station and atleast 87 trains halt at the station everyday but it still lags the basic toilet facilities at the stations. Senior Railways officials have been completely blind to the notices brought forward umpteen times by individualtravellers and passengers, even by those who represent public forums. It was also reported thatthe water huts at Vishakhapatnam railways station were found to be stinking.

The 2013-14 Railway Budget by the former Railways Minister, Mr. P.K. Bansal, was concluded this February. An amount of Rs. 100 crores was set in regard to the improvisation of the Railways Stations but with no ‘specific’ concerns with respect to the downgraded Sanitation and Hygiene of the Railway Stations. The ministers are more concerned about saving their seats rather than working for the public. The Budgets? The Budgets seem to be an inessential consignment over their heads.

There is an expeditious need to improve the Sanitation conditions of the Railway Stations. Ever seen the condition of the Railway Tracks? How do they look? Not even a single stretch of half a meter of the trackside is free from litters and garbage.

The Indian Railways are considered to be a fast profit making organization and operates the most densely utilized train system in the World. It covers about 104,000 km with more than 7083 stations and carries around 2.2 crores people and more than 2.5 million tons of goods daily but the poor sanitation conditions of the Indian Railways are a setback to the progressing Railway sector.

The toilets in the trains are like small boxes with a hole from where the human waste is openly disposed off on the train tracks. The train toilets have become one of the biggest sources of environmental pollution by spreading the human excreta through the lengths and breaths of the country. The Dustbins at the end of each bogey gets quickly filled up because of its inadequate capacity. Seeing Rats moving in and around the trains is nothing new to get shocked about and nothing to beat the unhygienic food served from the smelly and dirty pantry cars.

Though the Government of India has already published “Indian Railways Works Manual” which elaborates a complete chapter on Maintenance of Sanitary & Hygienic Conditions in Station Buildings, Yards and Railway Colonies’, the sanitary conditions instead of improving are getting worst.

Poor sanitation cases have also lead to a rise in diarrhea cases. The patients mostly belong to areas near the railway tracks.

Like many other railway stations, the poor state of sanitation with large heaps of garbage and choked drains also became a cause of concern at the Varanasi Railway station.

“My handbag was gnawed by a rat while I was sleeping in the night on my way to Jammu from Delhi in the Jhelum Express. I know it sounds funny but this has really happened with me. I have actually realized how ill maintained, the Indian Railways is.” Says Riya, a 2nd year student from Ramjas College.

“I was given a dirty hand towel which was stinking. When I approached the train staff to provide me with a clean handtowel, it took them one hour to respond.”, says Aakriti, a final year post-graduate student from the Law department, DU.

The Railway authorities should come out with strict policies. The passengers who encourageinsanitation in the trains should be heavily fined. Cleaning crews, properly equipped with the modern cleaning machineries should be present in the train from its departure till its arrival. The toilets, instead of heaving holes should have holding tanks, and the cleaning crew should dump the excreta in a proper and hygienic way, whenever the train stops at the junctions. Also, a clean and a safe system of disposing off the food materials, plastics and papers is needed to be maintained for the well functioning of the trains.

Sanitation should be the primary concern of the Railways otherwise it will always be a disappointment and a hindrance to the progress of the Indian Railways. Progress of a country booms in all its colors when the people of that country are healthy.

See it on Scoop.it, via irctc info

PnrStatusLive.com is for Travel Information Purpose only and is not associated with Indian Railways, IRCTC or Government of India in any manner.
PnrStatusLive.com or anyone associated with it shall not be responsible for any loss, damages or consequences. This service is only to provide information & help passengers.
Passengers are advised to contact Indian Railways before taking any steps on the basis of information provided in this website.